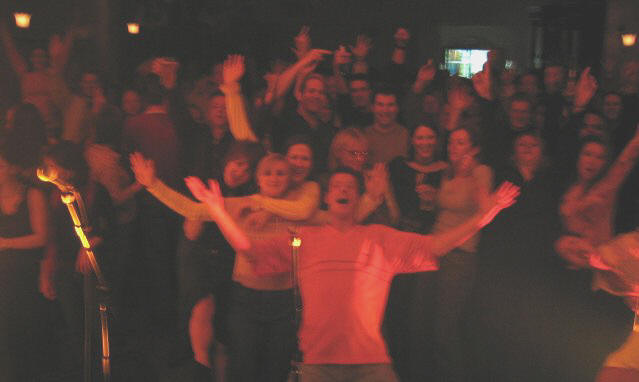 It was great to be back at the Royal Wells, although the room seemed smaller. We turned up pretty early for the Shots, ready to set up at about 5.00pm.

The first and most important task was to unplug the noise limiter, Phil took this task on and balancing on tiptoe on a chair balancing on a table he managed to disconnect the mic!

The limiter mic, looks still plugged in...  but it isn't!

A strange sight especially as he never normally unplugs and packs up!!!  We were soon set up and after a quick sound check we were on our way to freshen up!

On returning at 8.15pm the worst thing that could happen happened!  We were informed that they were not going to open the bar in the back room.  Instantly faces dropped and a rumour of 'we're not playing' started to go around.  Concerned at the impact of no bar the entire band got nervous.  This was soon resolved when management agreed this was foolish, as the singers would be missing for most of the night upstairs getting a beer!

By nine the room was filling and was soon packed with lots of old faces and quite a few new ones.  The band started and the crowd were quick to react to the old favourites.  A new song of Sk8ter Boi went down well although the singers couldn't disguise the lack of words.  It went down ok and I am sure will become a favourite.  By the second half both the crowd and band were getting lively and by the time we played the bowling for soup song (another new one) the crowd were in a frenzy!

Off at eleven NO HOPE, despite instructions from the management there was no way we couldn't continue and a few of the crowd joined us on stage for the last song.

All in all a great night and we hope everyone enjoyed themselves. Please let us have any comments or views. (here)

The band enjoyed this gig very much so...  mainly because the front row of the crowed was solid tottie!!!

Lookout!  Trouble is fiddling with the knobs!

Yet another stage invasion!

Trouble insisting that everyone smells her fingers!  God knows where she'd been sticking them, but going by the look on Jon's face, it must of been somewhere fruity!

We welcomed the help of some of our loyal followers to help carry all the equipment out to the van, unfortunately, they mistook some of the hotel's furnishings as our stuff and tried to load it in the van.  But we realised the mistake and duly returned it...

From: Roosevelt
"Had a real smashing time that evening. The band was very entertaining and a hoot. Super evening with good friends and a lot of boogie."