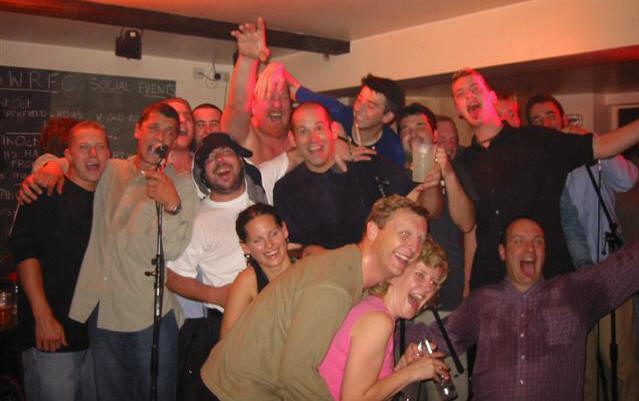 Wet, Battered, Bruised & Tired is how you probably feel after a game of Rugby.  It is not how we expected to feel after a gig!  But that is what happened.

It was the normal approach at the H&WRFC.  The band were ready for all the abuse, unfortunately this time was different, possibly due to us BORROWING Dwain the mascot last time we were there. But the lads were out to get us.

We had the usual signing problems from Big John Cashmore but he was surpassed by Rob Streeter for being the most out of control. Some might say this was down to the England defeat, I would personally blame it on the Ł8.50 drink concoction they were downing. Mix that with the high octane performance and you have a time bomb waiting to go off.

We put up with the normal abuse but things got worse and Jon was pulled from his mic during Delilah and bundled by many 20+ stone giants. Crawling back to the frontline it was only going to get worse and Jon & Del (who felt at home with this big lads) were soon being showered down.

Then up stepped Rob totally out of control and already having hit Brian in the mouth (not at full force of course) three times. Thinking he was Keith Moon Rob dived over the drums during Everybody, Brian attempting to hold him off (As if) and still trying to perform.

Here's an unsorted collection of photies!: